As you may already know a new House of Commons e-petition aimed at stopping the Roberts Bank Terminal 2 project opened for signature a week ago.

It is getting a good response and well on the way to reaching the number required for its sponsor, MP Manly, to present it to the House of Commons.

I am reaching out to you and a number of others in the hope you can use your contacts to get more signatures.

The signature page for the petition is HERE>>

It can be signed by Canadian citizens and residents of Canada.

It is also on the APE home page: https://www.againstportexpansion.org/home

I would really appreciate if you can send out an email asking folks to sign the petition.
If you can also put it on your websites that would be an added push.

It would be great if we can reach the numbers required before parliament reconvenes in ten days.

If you have already gone out to your contacts then THANK YOU!

Management admits no ridership analysis was done before pulling the plug!

Without any ridership statistics to back them up,  or consultation with Wreck Beach Preservation Society (WBPS) stakeholders in Electoral District A of Metro Vancouver, Translink  removed Bus Stop C-20 (University Boulevard and Marine Drive) this past month.   If they had checked their ridership figures, they would have learned that 387,285 visitors used Trail 6 in 2015.  Altogether, five trails accounted for a total of 528,796 users many of whom used the C-20 bus stop.  Those visitors contribute over $60-million annually in goods and services at all levels of government.  The former  (C-20 or # 51924 NB (northbound)NW Marine Drive at University Blvd.) ( bus stop where naturists will gather on June 5 to protest Translink’s bureaucratic dictatorship, lies  directly across from the head of Trail 6.

Public Input Before, Not After the Fact!

During the so-called public consultations on 87 locations last fall, Translink never specified C-20 nor did they advertise in the Vancouver Sun or Province which reaches areas outside the Metropolitan Vancouver area.  The WBPS has promoted public input before not after the fact for the past 47 years!  UBC  advised Translink to contact us directly, which they ignored.

Translink Immune to Hardships they Cause-Time for Minister Fassbender to return Translink to the Mayors!!

Mia Pers, Translink Management,  repeatedly claimed Translink has a responsibility for the safety of UBC students and with the escalation of sexual assaults on the UBC Campus, they felt they could better protect students and increase ridership by removing long-established C-20.   We reminded her that our tax  dollars pay Translink’s salaries.  Thus,  we should therefore be given the same weight as UBC students, staff, faculty and other  community stakeholders.  When Ms. Pers finally wrote to us officially after so-called consultation with upper management, UBC and  the bus company after stalling for three weeks,  the letter she sent us was nearly  a carbon copy of the one sent to  West Vancouver Libby Lodge wheelchair-bound resident, Pamela Best  who unsuccessfully tried to stop the cutting of the bus stop to the wheelchair-bound pensioners of Libby Lodge.

If you wear shoes and a hat, technically you are not nude!

We will have signs but we invite you to make your own.

This will be a peaceful demonstration and thank you for your support in advance!

That’s why they are called “feeder cliffs,” because they supply the beaches below with continual supplies of Quadra sands. 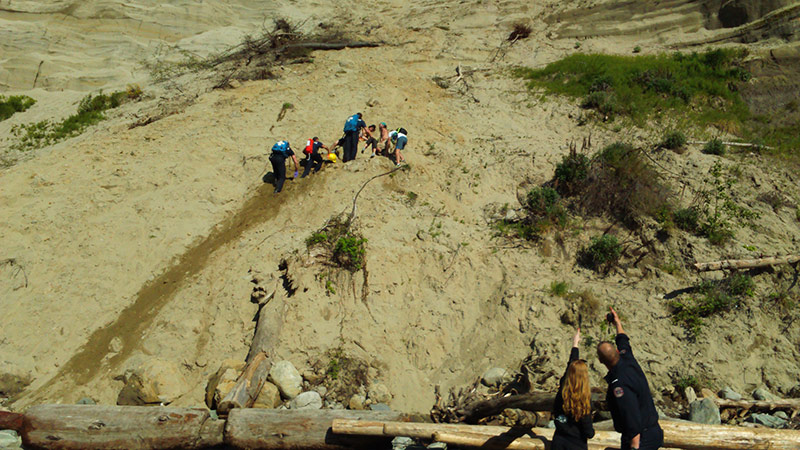 Recently, a young camper was killed when a landslide trapped him inside his tent and buried him alive. 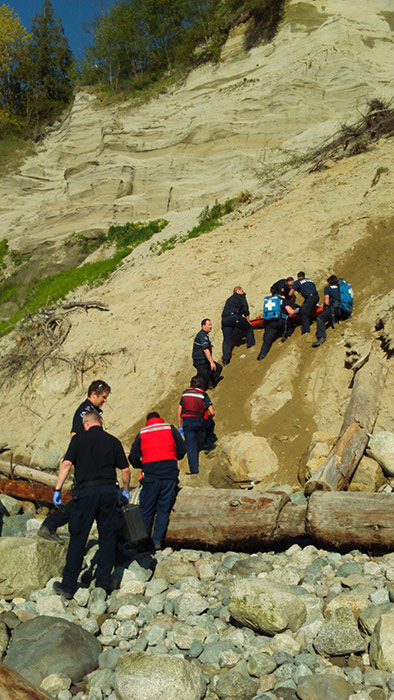 This young lady on the out-of-bounds trail reportedly sustained a broken collarbone although RCMP would not confirm the extent of her injuries.

She was released from hospital Saturday, April 9, the same night she was injured.

Did you enjoy your summer?

Now… it is the time to clean up Wreck beach!

We prepare all the equipment we need.

All we need is your body!

We don’t want JET FULE on Fraser River! With their poor technology, it will leak and they will do NOTHING!

It is the perfect weather to say NO to Port Metro Vancouver!

Please say NO to Port Metro Vancouver about the date they set for the public hearing.

Who do you think is going to attend this?

It is the end of the season and people are away for holiday.

They did this on purposely to get few people to show up on public hearing!

We all need to say NO! to Port Metro Vancouver and make them postpone till at least after labour day!

Over the next two decades, Dunsdon became Watermelon, a fixture on Canada’s most famous clothing-optional beach hawking watermelons and other edibles.

But the beach she loves so much for its natural beauty and sense of community is changing, she said, and naturists like her are dwindling.

“We’re an endangered species,” said Watermelon from her licorice store on Commercial Drive. From a 50-50 split in the early 1990s, the number of “textiles,” (Wreck Beach lingo for clothed people) has increased to about 70 per cent in recent years. “We’ve become the minority,” she said.

In the 1970s, beachgoers would get to the bottom of 400-odd wooden stairs on Trail 6 and immediately shed their clothes, said Watermelon. Not many do anymore.

Judy Williams of the Wreck Beach Preservation Society pegs the ratio at about 60-40 in favour for clothed beachgoers. But since a massive beach party organized on Facebook drew about 14,000 partygoers to the beach on July 1, the presence of “textiles” is even more prominent.

Why someone would want to come to a nude beach and not strip baffles Williams. She stressed the beach is a public space and open to everyone but “there’s a code of etiquette down here.”

It’s not the clothes that rile her; it’s the gawking, cameras, and body judgment that sometimes accompany those who are clad.

Williams has heard comments first hand. She and a friend were called “Mr. and Mrs. Santa Claus” by a group of snickering clothed young men, while another group ranked her a zero on the Bo Derek scale, she recalled.

“It’s appalling, this attitude toward the naked human body,” said Williams. There is no place for body shaming at the beach, she said. “Here they see old people, they see infirm people, they see them as they are, and they learn not to become judgmental.”

Williams, a staunch defender of Wreck Beach since 1969, said gawkers, including tourists disgorged from large buses who trip down the stairs to point and shoot photos, and camera-phone use are an increasing problem. The society is mulling putting no-camera signs on the trail, said Williams.

Despite being outnumbered on Wreck Beach, naturists seem to be flourishing elsewhere in Metro Vancouver.

Don Pitcairn, president of Surrey’s United Naturists, said there has been a couple of times this summer he and his wife couldn’t find a spot for their blanket on Crescent Rock Beach, a quiet, isolated stretch of beach west of Ocean Park in South Surrey.

Before the beach gained attention as a naturist’s haven in 2007, there was only a handful of nude sunbathers regularly scattered in the area.

It attracts naturists from across the Lower Mainland and Fraser Valley who go there instead of making the long drive to Wreck before paying for parking then trudging down the 400-plus steps ­— which some older folks might be loath to do, Pitcairn said. Many naturists also head to the east end of Barnston Island on the Fraser River, he added.

Port Metro Vancouver Open House to permit VAFFC to build the 80 million liter tank farm on banks of the Fraser River. Come and give them a ear full!! Please come and share this information…

Dear Supporters of Stopping Jet Fuel being transported into the estuary, we are asking you to request that the public open house which is a travesty because it is being held on Saturday, August 29th( when most people are out of town), be held after Labour Day, later in September and that the period of consultation which is supposed to end on September 8, should be extended. This is a deliberate attempt to bypass public input by setting the date at a time when many folks are on holiday or not checking
e-mail.

Please call Port Metro Vancouver and or Richmond City Council and ask that the public open house and deadline for public input, be extended since the current schedule only allows PMV to give lip service to true public input !

Please protest to postpone the date at least after Labour day (Sept. 7)!